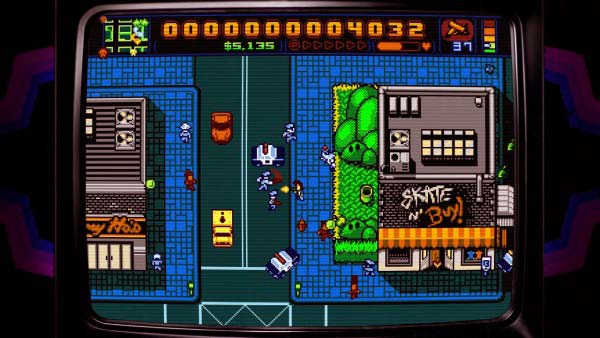 On the surface, Retro City Rampage looks like a de-make of Grand Theft Auto, but it manages to tap into much more than that thanks to its uniquely retro look. You play Player, who’s sent to the future by a Doc Brown analog who mistakes you for Bill and Ted analogs who crashed their phone booth into his car, and you must then rebuild the car by fighting a Dr. Robotnik analog, doing chores for a human Game Genie, and wreaking havoc across the city. If you’re a Gen-Y, this game is like your childhood forced through a beer funnel.

Everything takes place in a bird’s eye view perspective, and while the game’s structure is like Grand Theft Auto, it feels like a cross between Smash TV and Super Mario RPG thanks to its jumping mechanics and dual-stick shooter controls. Whether you’re fighting criminals or cops, they swarm and attack like thugs in a Midway shooter. Fortunately, when the typical pistol, uzi, and shotgun translate closer into their Smash TV counterparts than real weapons, and the shotgun is a classic spread shot, the mechanics feel right at home. There’s even a shield upgrade that spawns three revolving discs around you, like in Smash TV and Total Carnage.

The city is relatively small, but colorful and superficially varied enough to feel like a satisfying playground. The streets are full of stores like Skate ‘N’ Buy, Yippee Kiyay Mother Baker’s Hard Pies, and Epic Falafel, and you can customize yourself with multiple skins like sunglasses, mohawks, and eyepatches, and even change yourself to look like the Destructoid, Mojang, and Epic Meal Time guys. You can pick up plenty of weapons and drive several vehicles (including the Turtle Van), and you can even unlock power-ups like a jetpack and a bionic arm.

The mission design falls flat, and while every mission has some humorous call-out, they tend to boil down to going somewhere, shooting some people, and grabbing an item. The game tries to mix things up by invoking overused game tropes humorously, but it ends up playing them painfully straight in the gameplay. In one mission, I had to follow “Biffman” to his secret base, and had to pick up coffee on the way because tailing missions are so boring. Unfortunately and ironically, the mission itself was boring, and just as tedious as the type of mission it poked fun at.

Besides the main missions, there are plenty of things to do. There are several types of collectibles including loot bags and finding phone numbers on pay phones, you can find cheats written on walls, and you can find tons of secrets hidden in the city, like (yet another) Minecraft area. There are also arcade minigames based on Super Meat Boy, Bit.Trip Runner, and Epic Meal Time.

Retro City Rampage’s real accomplishment is how it manages to feel so genuinely retro. The beeping sound effects and pixelated graphics feel genuinely NES in style, and not just a modern game simplified and skinned with sprites. It borrows and draws inspiration from so many NES games, the package itself feels both retro and unique, like it was plucked from 1989. That’s just the default mode. If you really want to play around, multiple TV frames and graphical skins let you play the game as if it was a Game Boy game, Virtual Boy game, Atari 2600 game, or a handful of other unique looks.

Retro City Rampage is a game you should get not because it’s particularly good, but because it’s particularly unique. It tapes into old-school game design that itself hasn’t aged well, but it has so much nostalgia and gives you so much to play with that it’s worth the $15. It’s a game that has elements we don’t see anymore because the industry has moved on, but for those of us who remember renting games that looked and sounded just like it when we were 12, it’s a great experience.